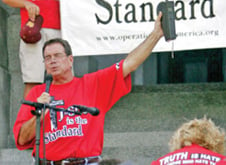 About Operation Rescue/Operation Save America
Operation Rescue/Operation Save America unashamedly takes up the cause of preborn children in the name of Jesus Christ. We employ only biblical principles. The Bible is our foundation; the Cross of Christ is our strategy; the repentance of the Church of Jesus Christ is our ultimate goal. As the Church changes its heart toward unborn children, God Himself will hear from heaven, forgive our sin, and bring healing to our land.

We believe that Jesus Christ is the only answer to the abortion holocaust. It is upon our active repentance in the streets of our cities that the Gospel is visibly lived out. We become to the church, to our city, and to our nation living parables which rightly represent God's heart toward His helpless children.

There are no cheap political solutions to the holocaust presently ravaging our nation. Like slavery before it, abortion is preeminently a Gospel issue. The Cross of Christ is the only solution.
Read More
Copyright 1987-2010 Operation Rescue/Operation Save America. All Rights Reserved.